[In May and June of 2020, a time of pandemic isolation, economic collapse, and intense partisan rivalry, videos of Minneapolis cops lynching George Floyd — a Black man with his hands cuffed behind his back — sparked nationwide mass protests against widespread police brutality and systemic racism in America.]

Unifying the Movements
Looking Back at Today's Uprisings

Julian Bond was a founder of the Students Nonviolent Coordinating Committee (SNCC), formed in 1960 during sit-ins at lunch counters in North Carolina and Tennessee. Bond was its national communications director during the voting registration campaign for black people, the Mississippi Summer Project of 1964. I worked with him as communications coordinator at the Moss Point project. Nearly one thousand of us, black and white volunteers from the South and the North, assisted black Mississippians to register to vote. Few were allowed to "pass" the special "Negro Registration Tests," such as: what does paragraph X in Y law say?

Three of our comrades (members of CORE) were found murdered at the bottom of a dam on August 4. James Chaney, Mickey Schwerner, and Andrew Goodman had been murdered on June 21, 1964. They had been picked up by local police as they were investigating a black church burning near Philadelphia, Mississippi.

During an FBI-led search for them, eight murdered bodies of other black men were found buried in woods, fields and swamps.

I'll never forget the facial expression of some of the killers during a court case. 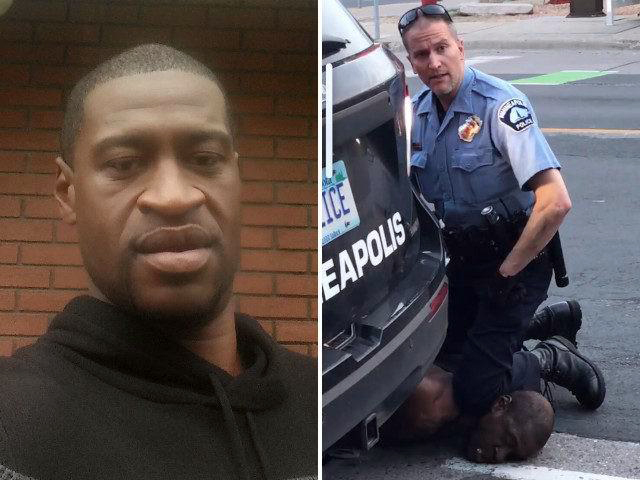 [George Floyd. His murderer on right, Derek Chauvin. Their careless at being murderers is what
we see on the face of Derek Chauvin living up to his "white chauvinist" surname as he murders George Floyd.]

"I can't breathe"! Motivated by the memory of slavery, colonization, and the 1950s-70s civil rights movement, black people are again fighting back, their actions sparked by the videotaped casual strangulation murder of yet another black man, George Floyd, by this ghostly white cop.

This time, in contrast to my time, everyone has mobile phones with photographic and video capabilities, which makes it difficult-to-impossible for cops to deny their murders. This readily available technology helps to spread reality even into the mass media, and we gain support.

This time, victims of white racism have even greater activist support from whites, Latinos and Asian-Americans. Day and night across the United States Police State, they are defying cops, tossing back the tear gas canisters fired at them, ripping down slavery/colonialist symbols, demanding an end to systemic racism.

The Establishment is worried, even more so than in my youth. The decades since have wrought more havoc: a major decrease in real wages, due to the neo- liberalization of the economy in the 1970's accompanied by weakened unionism; permanent aggressive wars since September 11, 2001, killing millions and draining funding for social welfare—an inadequate health care system, a more expensive university education; an unprecedented identity crisis, and divisions among people.

A decade ago, another inspirational revolt arose resisting the transfer of trillions of dollars in taxes to bail out greedy corporation owners and CEOs, who caused the financial/economic crisis of 2008-9. The militant Occupy Wall Street movement had much of the population's support. It had to be crushed. So the Democratic party's President Barack Obama, the hope of black and white liberal people, consorted with the people's enemy—the corporations—and unleashed militarized police to brutally stop protestors, destroying their camps, food, signs, beating them and using pepper spray and tear gas. Obama assured the ruling class they would not be bothered, and he could continue warring against more countries at one time, seven, than any other US president.

The fact that Obama, and presidents before him, cut back on social funding left the nation ill prepared to meet epidemics. Covid-19 reveals to nearly all but the ideologically blind that the economic system, that is, capitalism, is the culprit that facilitates the rapid spread of this disease without proper resources to curtail it quickly.

With Donald Trump in the White House, it is easier to feel that the power system is hopelessly out of touch with reality. Meanwhile its president vulgarly encourages racism and misogyny more than other presidents.

Today, there is greater awareness in much of the population of the evils of capitalism than in my youth. While the resistance is strong, passionate and clear about the need for system change, it apparently lacks, however, plans and leadership to change societies' racist and brutal structures.

Despite lack of direction, today's fighters for justice are incredibly courageous and persistent. They brave "crowd-control weapons"—flash-bang grenades, rubber bullets, tear gas, pepper bombs and spray, truncheons and clubs. National guardsmen have been sent to "clear the way". Military helicopters fly over protestors violating city and state laws. Surveillance is everywhere. The FBI even accompanies local cops to visit activist homes, hoping to entrap them for "lying to an FBI agent", a federal offense punishable by years of imprisonment.

Nevertheless, cracks in the system are enlarging, and many capitalists and their government officials see that. To prevent a total collapse, some city councils are heeding activists' calls to "defund" the police—shifting some police funds to social needs, even reorganizing police forces, replacing some police with community facilitators. City, state and even federal laws are being written to, at least, placate demands and even make useful reforms. Some cities already ban police chokeholds, no-knock warrants, using military weapons, mandating body-worn cameras, and perhaps ending "qualified immunity" for cops charged with "excessive force".

The probable next president, Joe Biden, even gives lip service of support for some of these reforms and to Black Lives Matter, the major name associated with much of the protests. Because Trump is so irrational, erratic and authoritarian in character, he is not a reliable president even for much of the ruling class and its generals. That became crystal-clear when, for the first time in US history, leading generals, and two Trump appointed Defense (sic) Secretaries, refused to militarize the nation by sending in their troops to clobber rebels, thus sealing the idiot's political future.

Elizabeth Sutherland Martmnez edited the book, Letters From Mississippi, written by volunteers, in 1965. A new edition was published, in 2002, with an introduction written by Julian Bond. I quote from it to show how it felt for us in the struggle for equality and justice.

"It was a time when nobody stopped to wonder, 'What is the meaning in my life?'"

That expression represents our identity as a human being in fellowship, something, I am sure, hundreds of thousands of activists in the streets of the United States Military Racist Empire feel today—so liberating! I wish I were in the streets resisting today. That's where revolutionary action is mounting!

We were inspired by a great counter-culture with an endless spectrum of music, poetry, literature, art, films. Our music was everywhere, in clubs, at outdoor concerts, love-ins, Woodstock ... In fact, our culture came to set the tone for much of society's mass culture.

Our music and individual musicians' commitment to justice and peace aided our struggles. Musicians often refused to perform to segregated audiences, or in apartheid South Africa and Zionist Israel.

In the 1960s-70s, we were many who learned to see the connections between racism, police brutality, and imperialism's wars with military brutality. The US imperialist war of aggression against Vietnam and later also Cambodia and Laos, was vividly horrendous with millions murdered.

It is always African-American soldiers who are sent to die first, and it is they who are the most consciously aware of the connections between slavery/colonialism/racism and imperialism. Wall Street sends its Pentagon militarists to war against people of color, in order to steal their resources, and re-enslave them with neo-colonialism.

Martin Luther King and Malcolm X helped link racial equality with anti-war struggles. Black and White marched against racism, police brutality and imperialist wars. King and Malcolm in their later years saw and articulated the interconnectedness of fighting for justice and peace and unifying all peoples regardless of color, race, nationality or creed. At that point, they became too dangerous to the capitalist-imperialist system, the US Racist Military Empire, and had to be snuffed.

Police brutality and the civil rights movement gave rise to the black power movement. The Black Panther Party (BPP) was among several such groups formed in the mid-to-late 60s. They followed the lead of Alabama's Black Deacons, armed for self-defense. They fed breakfast to black children and taught them to be proud. I supported them through solidarity organizing with whites. I was the full-time organizer of the Committee United for Political Prisoners (CUPP) in Los Angeles. The BPP was on J. Edgar Hoover's FBI's eradication list. Not religious, the Panthers nevertheless looked up to Malcolm X, a Muslim. They, too, had to be wiped out.

Our struggles for racial equality led to radical women fighting for equal gender rights, which many men joined; the Mexican-American/Chicano and Puerto Rican Latino movements; and the Native American movement (Wounded Knee Occupation, 1973, where I also participated with the American Indian Movement). Homosexuals were also inspired to struggle for equality and an end to brutality against them. The feminist and Gay Rights movements have had significant victories. Our internationalism embraced struggles for the liberation of all colonies, especially in Africa where many socialist movements won power, at least for a time. We supported the toppling of US-backed and embedded ruthless dictators and military regimes, especially in Latin America. (Remember the Pentagon- CIA's Operation Condor, which coordinated a multi-nation assassination and murder campaign targeting Latin American leftists.)

A disappointment with today's uprisings is the lack of connecting domestic racism and police brutality to US war policies and military brutality—the invasions of countries populated by people of color. Why is this movement ignoring this essential connection? Possibilities:

Militant resistance has changed the national discourse for the moment, at least. It has also had an impact upon other societies, especially in France, somewhat in Brazil, Germany, Australia, even where I live in Denmark.

Outrage in the streets makes it more possible to show how anti-life the economy and lifestyle based upon competition is. Our rebellion and the Corona virus make it easier to illuminate connectedness for what it means to be a human being compatible with all life on this planet. Competition leads to annihilation whilst a life based upon values of cooperation is uplifting and leads to sustainability—a cooperative economy, true equality, real democratic decision-making, which requires abolishing that which does not advance human life: wars, torture, slavery, child labor, discrimination, pollution of mother earth.

"If we want to save the planet earth, to save life and humanity, we are obliged to end the capitalist system," thus opened Bolivia's then President Evo Morales' "Ten Commandments to Save the Planet." "Sisters and brothers, as the tenth point, we propose to Live Well, not live better at the expense of another..."

Revolution for Justice, Equality and Peace!
Don't let the system return to normal!
Stop the Killing Everywhere!
No Justice No Peace!
No Socialism No Solution!
Unify the Movements—Build a People's Party

[RON RIDENOUR is a US journalist, civil rights and anti-war activist living in Denmark. His books, "The Russian Peace Threat: Pentagon on Alert" and "Winding Brook Stories" are available at Amazon and Lulu. His other work can be found at www.ronridenour.com
ronrorama@gmail.com]