A lonely two-lane road splits the quiet countryside of Mississippi. A small huddle of white men shield themselves with a sign that reads "Members Only." A black woman looks away from a funeral procession to challenge the camera with her stare.

These images were selected by Chude Allen, Bruce Hartford, and Ron Bridgeforth from the photographs on view in Danny Lyon: Message to the Future. Veterans of the civil rights movement, each of them, like Lyon, traveled south in the early sixties to join the fight for equal rights for all Americans. After their participation in "Bearing Witness," a discussion held at the de Young about their roles in the movement, we asked each of them to choose a photograph and offer a personal perspective. 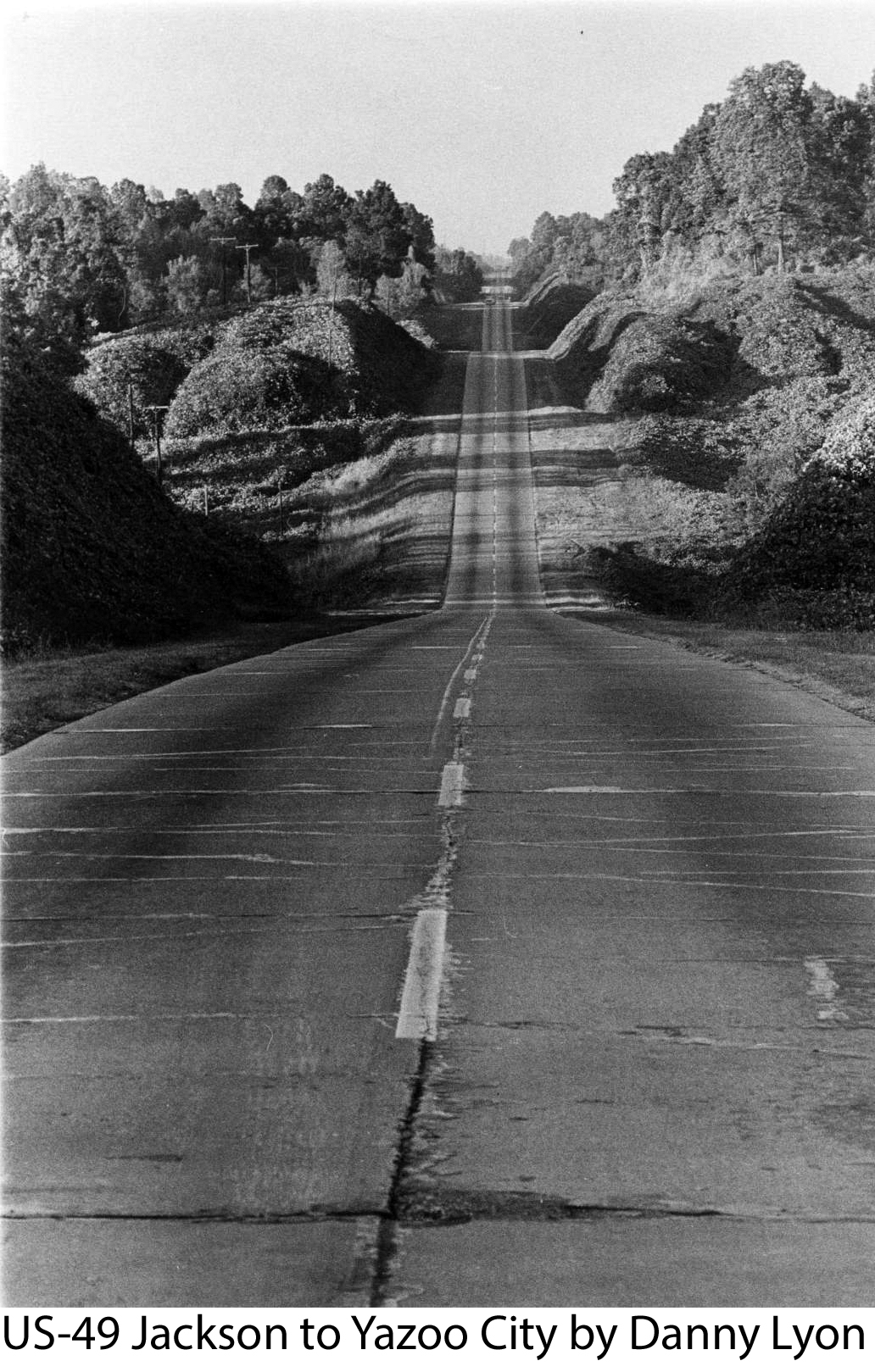 For Chude Allen, a sense of the geography in Mississippi, "the environment, the country, the tremendous heat in the summer, the cold in the winter," was a significant part of her experience.

This photograph, The Road to Yazoo City, Mississippi, brought back powerful memories of the dread that these landscapes could inspire: "When I saw this photograph of the highway and the kudzu and the length of the highway, [I remembered when I was] in Holly Springs and the voter registration workers would leave in the morning and go out on these roads. We never knew if we would see them again.

Anything could happen on this road. There weren't a lot of people watching who would have been witnesses. So that and the simultaneous sense of the land, the heat, the vegetation, and the isolation, all those are part of what made the experience what it was."

"We Never Knew if We Would See Them Again" 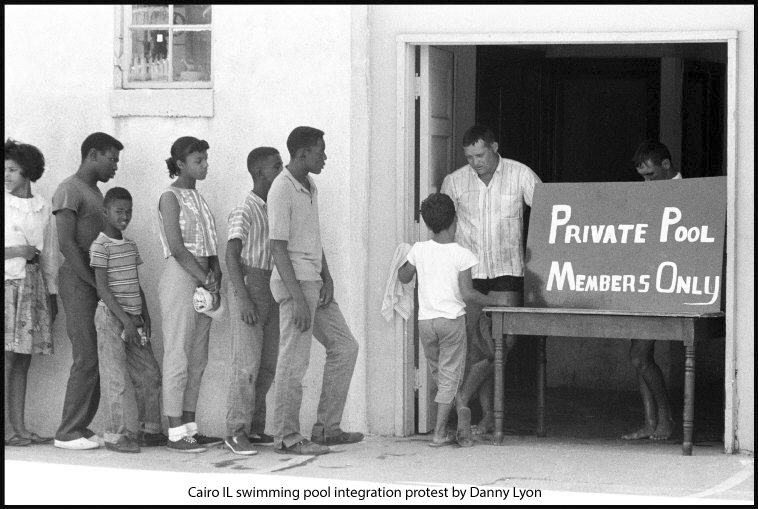 Bruce Hartford was struck less by the subject matter of the image he selected, and more by what was missing. The photograph of a small protest in Cairo, Illinois includes two groups standing outside a segregated public pool. Outside the frame of this particular image though, something else was happening:

"The photograph that's not here [another shot taken on the same day] shows John Lewis kneeling in prayer with two other people, one of whom is a young girl, who I would guess is 12 or 13. Not shown in the picture is a pickup truck driven by a white man that tried to run them down, not at high speed, but that advanced on them slowly. Everyone scattered except that girl; she stood her ground. She had just gotten fed up, she was not going to be abused anymore, she was going to defy this Jim Crow racism. She refused to move and she was struck by the truck.

She wasn't seriously hurt fortunately, but it was that kind of defiance that made the change in the South far more I believe than the laws and the courts. What really won the changes was that black people simply refused to accept it anymore. And that photograph illustrates that, if you know the story that's around it."

"Everyone scattered except that girl; she stood her ground. She had just gotten fed up, she was not going to be abused anymore, she was going to defy this Jim Crow racism." 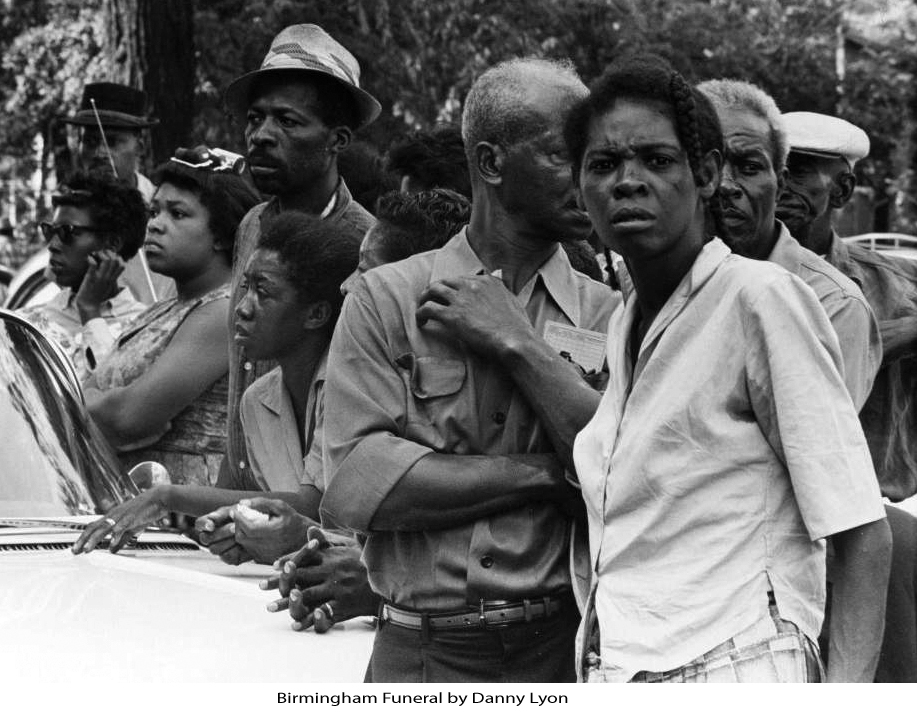 A woman experiencing deep grief was what drew Ron Bridgeforth to Crowds along the Funeral Route, Birmingham, Alabama. This photograph was taken during the funeral procession for four girls killed in the bombing of the 16th Street Baptist Church in Birmingham, Alabama.

Bridgeforth spoke of his deep emotional connection to the woman in the photograph: "It just captures the horror. They killed children going to Sunday school. It doesn't get much lower. And people in this picture no doubt lived in fear and oppression all of their lives. It's not just the guns and the Klan, it's the lack of education and the outcomes that come from not feeling like you have any control over your life.

But also seeing this picture, [I see] a determination. I think with that bomb they went one step too far. It took me a long time to understand that if you allow it to, the things that we've experienced in this country will destroy us. The only way that we survive is if we find love. The impulse can be anger, but that can't carry us through, in fact it will cause us to self-destruct.

I love this woman. It's because of her that I survived. And that's what the camera can do. It can capture what eyes don't see. They killed her babies, maybe not hers personally, but they're all our babies. We still got work to do."

"I love this woman. It's because of her that I survived."