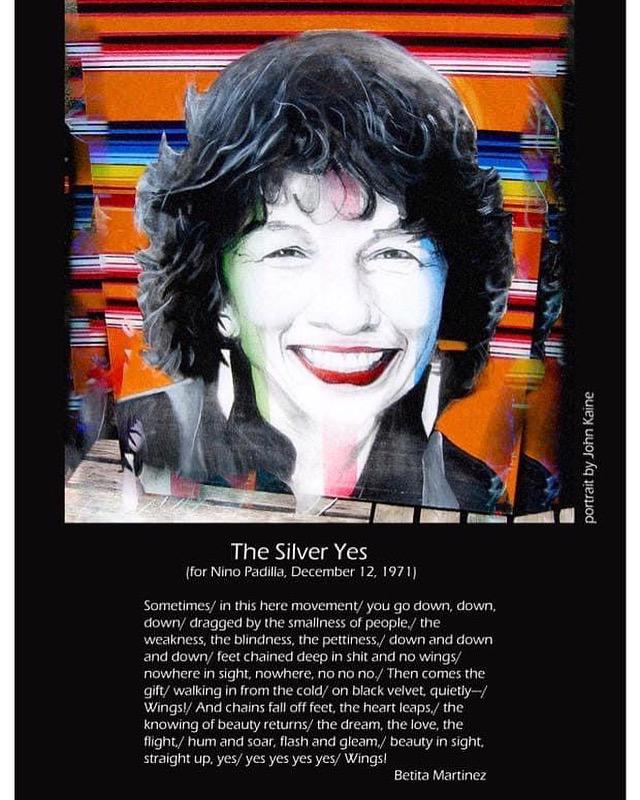 The Silver Yes by Betita Martinez for Nino Padilla

So much sorrow on our hearts. She was fierce and leaves a legacy that I hope activists coming up the ranks will inherit.

I lived with "Liz" when I first arrived in NY to work in the NY Friends of SNCC between my stint in Laurel & being sent to Atlanta! Jim Foreman arranged for her to take me in! You can imagine how me, "A Little Memphis Girl" arriving from Laurel to NYC! It was culture shock! She eased me through it! 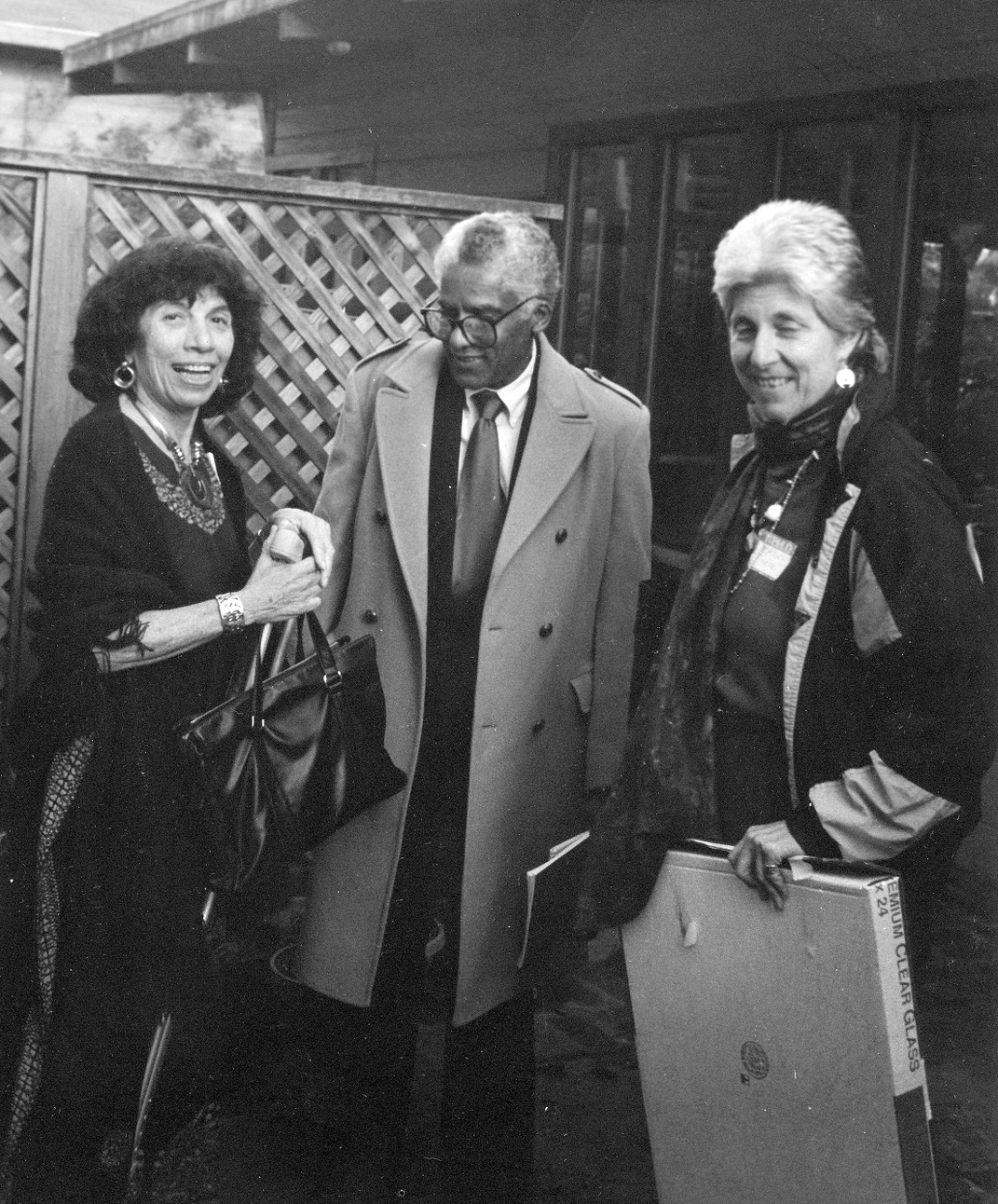 Betita's friendship and mentorship were absolutely crucial for my survival and sanity as a first-generation, college-educated Chicana. Betita was instrumental in influencing my understanding of the world; she enabled me not to feel alone and to believe in myself. Betita was among the very few people who came before me that I could ask for advice and comfort. I could never repay her for all that she has given me in terms of political insight, courage, corazon, and love for our gente. But I can pass these gifts on to others. That is exactly what Betita would want.

"The Work Said Who I Was"

I remember her most vividly from Stanley Nelson's film FREEDOM SUMMER where she spoke so honestly and candidly about her experiences in Mississippi 1964. I am moved that we worked together that summer.

I was Betita's Student Nonviolent Coordinating Committee (SNCC) counterpart in the Bay Area where I was "field secretary" from 1962 - end of 1966. She was then in NYC. Our offices each did very well in our fundraising and general support work, though on the funds front NYC's was in a league all its own. Toward the end of that period, we had different views of what was going on in SNCC; we also knew we were on the same side. That couldn't be said about all of us at the time.

When she moved to 24th Street at the border of the Mission District and Noe Valley in San Francisco, Betita was also a neighbor. Going down or up the hill to/from BART would lead me past her apartment, so I would drop in on occasion and always be treated with Betita hospitality.

By this time, we were settled in our differences, but hoped there would be ways for our respective points of view and political allies to work together. In those days, Betita was traveling a lot. In most of her destinations, I knew someone working as a community organizer in what might be broadly described as the "Alinsky tradition," which is also where I was politically. I'd ask Betita to see whether her comrades there were doing anything with people I knew. The universal discovery was "no," sometimes accompanied by hostile editorial comments. We commiserated about that.

I don't recall when it was, but there was a period when Betita was feeling isolated, lonely. I wrote her a note saying something like, "support is just up the hill." The next time I was there, she had it scotch-taped by her computer. I was touched by that.

As remembered by Faith Holsaert
July 4, 2021

I worked in the NY SNCC office with Betita, and many others, the summers after I returned late summer 1963 to NYC from working in the field in Southwest Georgia. I love the image of Betita on the phone in the LA TIMES obituary, because that is how I remember her: always on the phone. I'd come to the door of her office; she'd glance up and wave me in.

The NY office was quite a fund-raising powerhouse. I think I read recently that we raised something like $350,000 for the 1964 Mississippi Summer. I was barely into my twenties. Betita, and her predecessor Julie Prettyman, taught me so much. How to process a massive direct mail, among many other things. We all worked our phones the way people now work computers and the internet. Betita was a writer and brought publishing world connections to the office, as well as creating the book of SNCC history and photos, with text by Lorraine Hansberry, The Movement.

I lived in Santa Fe, New Mexico, in the late 60s and spent time with Betita there. Betita moved to San Francisco and was a stalwart and visionary member of the Chicana/o struggle. Decades later, Betita contributed a piece to Hands on the Freedom Plow, She and I both attended the San Francisco launch of HANDS, where her daughter, Tessa Koning-Martinez accompanied her. The last time I saw Betita, and Tessa, was at the 2010 SNCC reunion in Raleigh.

I will miss having Betita's physical presence in this world.

I first met Betita in the mid-1970s here in 'Frisco, and then again in the early 2000s when we formed Bay Area Veterans of the Civil Rights Movement.

When I think about Betita, what rises in my mind's eye is that she truely was one of the Lamad Vav.

"Lamad Vav" is Hebrew for the number 36. More importantly though, it refers to an ancient Jewish legend that predates the Talmud. As is true for all traditional cultural & religious lore, there are a wide variety of versions and interpretations of the Lamad Vav tradition. The one that resonates with me is that so long as there are at least a minimum of 36 men and women alive in the world who dedicate themselves to the pursuit of justice the world will not fall and hope won't be extinguished. They don't have to be Jews, they don't have to be public, they may not even be conscious of who they are or what role they play, but they preserve the light and continue the long journey towards the goal of freedom and equality.

For me, Betita was one of the Lamad Vav.

Betita Martinez and I were like combatants in a fox hole.... We were two Mexicana's who worked for the Student Non-Violent Coordinating Committee in the early to mid-60's. Betita, a generation above me, set aside a successful professional life to run the New York SNCC office. When I joined SNCC earlier, only a year or two out of college, I was assigned to the deep South working with local communities in Alabama and Mississippi on their communication and photography needs. While different, we always had each other's back.

In the early 60's there was little national consciousness about Latino resistance movements, especially in the Eastern US. Many of our SNCC compañeros and community folks had never met a Latino. While we might have private conversations about our respective cultural histories, Betita and I were in the liminal space between black and white struggling with an identity that was not recognized in the civil rights world we occupied. One was either Black or White: We were neither.

However, in the mid-60's, SNCC was the first civil rights organization to provide critical support to Cesar Chavez and Dolores Huerta's United Farmworkers Union (UFWOC) in California. In 1965 the organization responded to UFWOC requests for training in nonviolence tactics, CB radios, cars and funding for two staff to work full time on union campaigns.

SNCC's support for the grape boycott was critical in the union's victory in achieving a contract with grape growing corporations. In 1966, when the union launched a 300-mile protest march from Delano California to Sacramento, Betita was invited to speak and proclaimed to more than 10,000 farmworkers and supporters "We are with you and are proud of ... your victory because it is a victory for all the poor of the world. It is necessary that Blacks and Mexicans see that there is only one cause — justice."

Perhaps SNCC's involvement with the farmworkers had created a space for Betita and I. Despite erroneous scholarship claiming that in 1965, because of SNCC's adoption of the Black Power ideology, Betita and I were 'thrown out of SNCC because we were white', We Were Not! A 1967 SNCC staff roster named both Betita and I in a call for an all-staff meeting.

SNCC and the struggle for Black Power, formed us into lifelong vocations of resistance against white supremacy, colonialism and racism... no matter where we ended up. When Betita came to work in NM she made a significant mark in community journalism, grass roots media and cultural publishing. In 2008 she authored "500 Years of Chicana Women's History," when she was in her 80's. She went on to the Bay Area and achieved an enormous body of teaching and communications work which, among her legacies, created opportunities for cross-racial coalitions for change.

Today our SNCC compañeros and others in the black movement seek alliances with people of color because we will only be victorious in our resistance struggles ... together. We still have a lot of work to do to learn about each other's cultures and histories of resistance. But if we do the work and develop authentic relationships, black, brown, red and yellow together will be an indomitable force for justice and freedom.