[This narrative extends and expands the information provided on Marty's Roll Call page.]

On August 4, the bodies of the three missing civil rights workers were found buried in an earthen dam: James Chaney, Michael Schwerner, and Andrew Goodman. They were not the only murder victims during that summer, but two of them (Schwerner and Goodman) were from New York City, and the deaths of these local boys fired the outrage of the city's civil rights community like nothing else.

[My wife, Viki Ortiz] and I attended a packed memorial meeting at one of the big churches in Manhattan. The call went out there for a "second wave" of volunteers to go to Mississippi to demonstrate that we would not be cowed, we would not be terrorized. Viki and I looked at each other and decided we were going.

We wanted to go the next day, but actually getting it together took some time. We applied for and got a leave of absence from Brandeis, where Viki had been accepted and I was due to start my second year. We had to line up pledges of financial support from friends and acquaintances, since we couldn't work in Mississippi.

Then there was the matter of the indictment for the Cuba trip, which confined me to New York City and Long Island, so that I (to be exact, Leonard Boudin) had to get a written order from the Federal District Court permitting me to travel to and reside in Mississippi.

[When the U.S. Government prohibited travel to Cuba, Marty joined a delegation of some 60 students who defied that edict. After he helped organize a second student trip to Cuba in 1964, he was indicted along with eight others for the crime of "Unlawfully, willfully and knowingly conspire and agree to induce, recruit and arrange for a number of American citizens to depart from the United States for the Republic of Cuba." In January of 1967, the Supreme Court overturned the case ruling that the nine "... were charged with conspiracy to violate a nonexistent criminal prohibition." See Cuba 1963 for details.]

I traded in the VW beetle* for a dark green Dodge panel truck that had belonged to a plumber. It looked faintly military and offered more protection than the beetle, and we could sleep in it on the way down. It was late October before we set off for Jackson.

* Bruce Hartford, a veteran civil rights volunteer active in most of the Southern campaigns, wrote: "In the Summer of '65 I worked on voter registration and desegregation in rural Crenshaw County — 50 miles south of Montgomery [... ] That was deep in Klan country, and I learned that when a dozen carloads of KKK chase you across half the county, a VW bug is not your vehicle of choice."

And yet, she and many others like her were undeterred and opened their doors and hearts to us. Whenever I read historical accounts of liberation movements, stressing that the support of the people is the necessary foundation, I am brought back to my memories of Mrs. Bell and the other heroic people of Mississippi whom we met in the winter of '64. 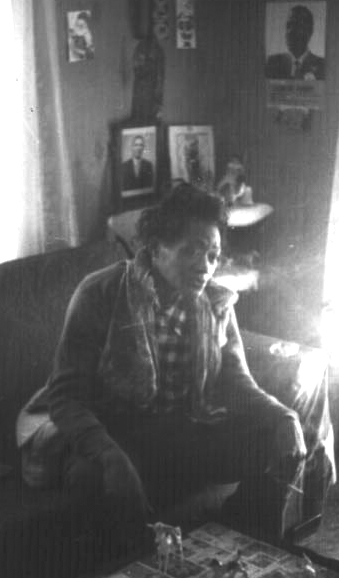 When we first came, our picture of leadership focused on the college-educated types from elsewhere, like Bob Moses, born in New York and trained at Harvard. Those certainly existed, but the movement would have been hollow without the core of local people who became leaders during the struggle. There were the famous ones, like Fannie Lou Hamer, who had electrified the Democratic National Convention in August, and Lawrence Guyot, the chairman of the statewide Mississippi Freedom Democratic Party.

There were also scores of others, less well known, but vital to their communities. Here is a picture of one of them, Mrs. Palmer, who was central to the Freedom Democratic Party organization in Jackson in Mrs. Bell's living room; the posters in the background are of Aaron Henry, the Freedom Democratic Party candidate, and of Medgar Evers, the NAACP Secretary who was murdered in Jackson in June 1963.

When we went down to Issaquena County for the school boycott there, we stayed at the home of Mrs. Unita Blackwell. Mrs. Blackwell, who was born in Mississippi of sharecropper parents. She had become involved in SNCC and the Freedom Democratic Party during the summer. As it happened, her son was one of the children suspended from high school in the incident we reported in our newsletter of February 18, 1965. Mrs. Blackwell later filed a lawsuit against the school board. Freedom Schools continued in Issaquena/Sharkey until 1970, when the school system finally desegregated. Mrs. Blackwell later became the first black woman to be elected mayor of a city in Mississippi, and went on to a distinguished career in public service.

People like Mrs. Palmer, Mrs. Blackwell and many others whom we met show that the capacity to lead and to govern slumbers in ordinary people. In the oppressive atmosphere that passes for "normal," this capacity never has a chance to develop. Politics then is mostly in the hands of the wealthy, the ambitious, the egotistical and the sociopathic, who make a thorough mess of things, gorging themselves at the public trough while plunging everyone except their cronies deeper into poverty and misery. But in the exceptional atmosphere that the Mississippi Summer Project created people who until then lived in the shadows, unnoticed, unremarkable, unschooled, unpropertied, may step forward into the light, discover their slumbering talent for organizing, leading, and governing, and show the world a long unseen model of political leadership: honest, courageous, genuinely of, by, and for the people, and dramatically effective in changing the world.

The incident where our truck wouldn't start in the rain, by the side of a farm road about a mile from Mrs. Blackwell's house, will remain in my memory as long as I have one. Issaquena County is Mississippi river bayou country, about as deep South as it gets. Muddy Waters was born there. With the rain pouring down on the windshield, I cranked and cranked the engine, knowing that the sound was advertising our vulnerability, come-and-get-us, come-and-get-us, like the bleating of a wounded lamb in the land of wolves. When the profile of a face suddenly appeared in the wash of rain over my window, my heart stopped, until that face, on closer approach, revealed itself to be black. We were safe! I remember this because as whites in the Northern cities we were and are conditioned by relentless media exposure to view the presence of black men in the vicinity of our cars as a danger. In that rainy Mississippi bayou night it was just the opposite. Had it been a white face, we might be dead.

We also encountered some remarkable white volunteers passing through Jackson, people like Bruce Hartford who had spent years in different civil rights campaigns in the Deep South, and Bob Zellner, one of the Freedom Bus riders and a SNCC field secretary. Zellner was later our classmate in graduate sociology at Brandeis.

One Jackson-based volunteer who sticks in my memory is Fred Heinze. He suffered from polio since childhood, and the disease had warped his face to one side, disfigured his hands and reduced his walking to a shuffle. Yet he was out there with us every day, canvassing door to door, doing whatever was necessary, unafraid.

Shortly after we arrived, there happened to be a retreat of sorts involving SNCC and COFO volunteers from the region. We listened to status reports from Moses and Guyot, and a number of SNCC field secretaries gave local updates, some of which were like battlefield reports. We hung on every word and tried to take it all in. Toward the end, after the important business was over, the new volunteers were asked to say a few words. By prearrangement, I read off a short paper I had written about the Vietnam war and its relation to the civil rights struggle. I relayed some of the knowledge I'd gained from listening to the NLF people in Havana in the summer of '63. I've lost that paper, but I remember the closing line, something like, "Let the Vietnamese have their freedom, and give us ours!" Bob Moses' comment to me was "Not bad." There was a great deal of interest in the Vietnam war among the civil rights workers and the people we met; there's more about that in the newsletter.

One incident mentioned in the newsletter concerns the problem of clearing the building to set up a Freedom Library [in Jackson]. Our newsletters told a sanitized version of our solution. As I said earlier, that building was jammed floor to ceiling with discarded textbooks dumped on COFO by some Northern school districts. We had to get rid of them in order to clear the rooms and make the place usable. But how? Recycling was still unheard of; the word probably hadn't been coined yet. Someone suggested we burn them in the back yard, the way that everybody burned their trash then, and that became my assignment. There I was, a German immigrant from an anti-Nazi family burning books for the civil rights movement. It was a pissy irony. What's more, it was impractical. Books burn very slowly. You have to turn the pages with a stick. It takes forever. (Years later I researched it and learned that the Nazis drenched the books in gasoline.) After a couple of depressing hours, I gave up. We had to find another way. The books sat for days, a week, longer, while desperate minds searched for a solution.

Finally a local volunteer came up with an idea. There was a certain white landlord, not beloved by the community, who had a double garage to rent. A deal was struck, a month's rent was paid in advance. A crew of volunteers came in and we toted boxes of books from sunup to sundown, like bales of cotton, into a truck and then into the rented garage, euphemistically dubbed "the new warehouse." I don't know if a second month's rent was ever paid, but I suspect not. That was the real story. It wasn't pretty, but it worked. 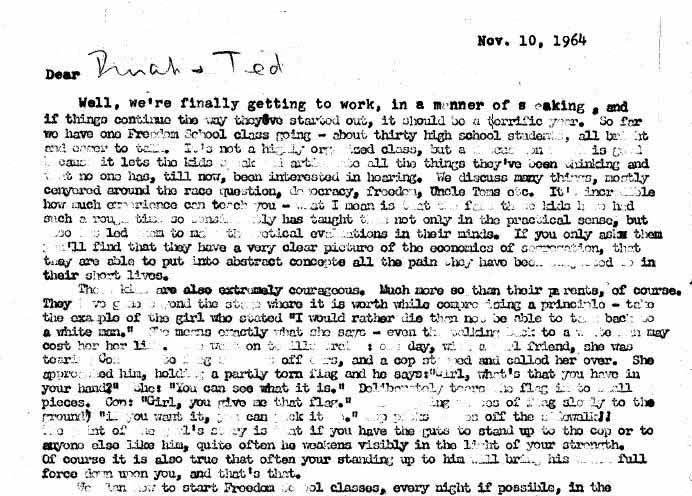 Viki and I wrote these newsletters to our friends and supporters up North to keep them informed and to remind them of our need for support. A number of those writings have survived. I am grateful to Viki Ortiz for preserving them and sharing her copies with me, and for permission to reproduce them here. They were her writing as much as mine. We produced them with a manual typewriter on mimeograph stencil and ran them off on an ancient hand-crank mimeograph machine. The first issue looked like this.

Later, our mimeograph technique improved and they became more legible. In the texts I've broken up the original long paragraphs (stencils and paper were expensive then) and added a few notes and references. If you're only going to read one of these, read December 25, 1964.