[These CORE protests were taking place during the Congressional debates on the Civil Rights Act. See New Orleans Merchant Boycotts & Sit-ins and Freedom March in New Orleans for background information.] 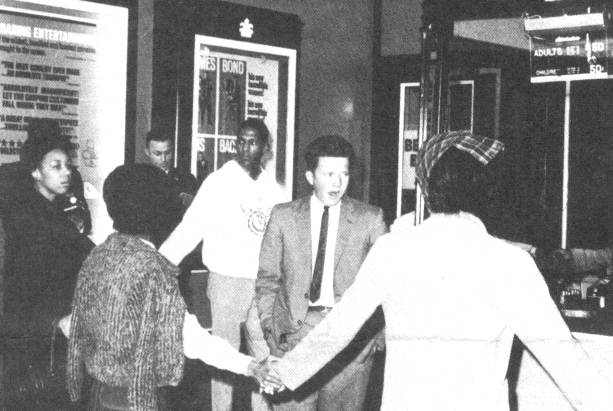 Since November 1963 New Orleans CORE had been picketing three downtown theaters urging that they admit Negroes. It is the end of March 1964 and the situation called for new techniques. So on Good Friday, nine of us joined the line of patrons at the ticket window of Loew's State. The line moved briskly. The first of our group reached the window and placed her money on the counter. It was not the ticket seller but the assistant manager standing nearby who refused to sell the ticket.

One by one, we followed. Each was refused, without explanation. The last of our group, Alice Thompson, then walked behind the ticket booth. We joined her, linked hands and completely surrounded the booth forming a "Freedom Ring." We began to walk in a circle. The surprised patrons fell back into the quickly-gathering crowd of spectators. A few held their places in line. One man tried to break through our ring but failed.

While we circled the booth, police conferred with the dejected theater manager. Then a policeman came over to our group and asked us each, individually, to leave. We refused. He placed us under arrest. We sat down, still in circle formation. Policemen then lifted each of us onto a hand-truck, rolled us to the paddy-wagon and took us to jail.

It was a first arrest for Katrina Jackson and Harold Sullivan. Shirley Thompson, Ruth Wells, Linda and Dorotha Smith and Alicia Joseph had been arrested before. I had been arrested five times in the course of New Orleans CORE's years of nonviolent action.

We were booked on an open charge. It was later minutely particularized to "criminal mischief," "obstructing passage," "disturbing the peace," "refusing to move on" and "resisting arrest." After three days in jail, we were released on bond pending trial. In February, through the intercession of Sonny Liston whom we had contacted, the closed-circuit telecast of the Liston-Clay prizefight was shifted from Loew's State to the municipal auditorium.